Back to all posts

I'm often asked, when I began singing? I can't remember a time when I wasn't singing, and it must feel amazing to sing like that, do I feel powerful singing like that? Yes, it does feel amazing and powerful! I am paraphrasing these questions that come up after my performance as a professional singer. I want to speak to the assumption that I was born with talent because I also remember not being noticed at all for my singing let alone getting such questions asked of me. I remember all too well... So, I want to share a story of the beginning of this opera singers journey, a story almost never told and for me, it answers these questions better than the stock answers I usually give which are only a surface answer of a deeper truth.

I suppose I was listening before I was singing. Somewhere between the beginning of listening and discovering that I could also make sound a magical thing happened, I fell in love with music. I fell into its trance and was always more comfortable in its presence than without it. Like an addict, I longed for music as I played with my toys in the living room. My father’s sound system infused the room with classical music, romantic music, contemporary music, opera, mariachi, musicals and more. I would escape the dull realities of the room and enter a life of multidimensions, colors, textures, drama, comedy while my hands and body conducted the scenes unfolding before me. My imagination flowed freely creating alternative worlds. Sometimes, after many hours of listening to Mozarts 21 piano concerto I would wonder, why did Mozart start a melody with a high note then drop to finish it so much lower? Did someone clumsily drop something over and over? Rocking back and forth between listening and creating I moved between phases of absorbing through listening and a more active phase of creative storytelling to analysis of what I was hearing which usually took on a curious nature, wondering what is happening and why the music was constructed this way. Listening was the first step in my musical journey.

Voice was my first instrument because I didn't know how to play any others. I used my voice to sing with everyone in music. Eventually I would create my own descants and improvise additional lines to compliment the music, fantasizing about being in the same room with the composer, conductor and all the musicians as together we'd create this lovely collaborative experience and they would see how much fun and creative I was, so that I would be invited over and over and over to play with them. This is how I grew up, singing music with many orchestras, singers, bands, musicals, operas and in my mind, we were doing this together, they were my playmates.

When I was older, my mother would rotate a series of stories about me as a child. One of her favorites was a story about me entering a room full of rage because someone had stolen the song that I had already written. "Mom! how did they do this? I swear I wrote it; I DID!! and now it's on the radio!" It does sound like something I would do so I don't doubt this story is true even though it was not my personal memory. You see, I did and still have parts of my being that feel such a strong connection with music that it feels like a fantasy land where I am intimately part of all music and somehow it is mine and I am music. So, I can imagine a young version of me saying such a thing. I was probably confused about what was actually mine and what I was listening to. I know this must sound as strange, it is kind of strange to explain and I share this because I feel I have a relationship with music without reference to my talent or abilities. Also, despite my flaws as a musician and performer I don't feel any sense of wrongdoing because it's so much a part of me that none of that "perfectionism" can touch this cherished part within me. I will sing as I breathe, as I eat, as I dress, as I walk, as I live...  I don't always feel connected with this side of myself but it's there to be accessed at any time. This is where I feel my passion and talent emerge from.

It would be a mistake to assume that I was a musically gifted child or that I always had a beautiful singing voice. I would love to claim the story that begins with that child prodigy turned into professional musician. Instead, I was cursed with the knowingness of what glorious music is without processing the skills to produce it myself. So, I reached for anything that drew me closer to producing music which for me meant singing in choirs, getting piano lessons, violin lessons and clarinet lessons.

I will always remember the first time my father took me to the library to check out some new books for summer reading and after that part of our visit was over, he led me into the music section that was full of records! I had no idea that you could check records out! WHAT?! Elated, I looked through records of opera, finally settling on "Cosi fan Tutte" the cover caught my eye, I had no idea what I was looking for except that it be different from the records at home. Many people wait around for the arias, I delighted in the recitative between the arias. I thought this was so brilliant! why oh why don't we speak to each other in this same way? Our speaking pitches are so boring and dull in expression. Well, at least I enjoyed this improved way of speaking during my playtime with my dolls as characters in made up stories. I would make up stories because the opera was in Italian which I didn't understand and was quite ok not knowing the actual story, because I was free to make it up which is more in line with how my spirit wants to be in relationship with music anyway.

The first Opera I saw was Bizet's Carmen on the T.V. with Placido as Don Jose and Julia Migenes-Johnson as Carmen. I was about 10 yrs old and I was already absolutely sold on opera having listened to it on records for many years prior to watching this version of Carmen. Watching this drama play out in a very passionate and sexy way (which awakened that part of me as well), I knew upon seeing this that I wanted to be an opera singer and I wanted to be Carmen! I wanted to fight with women in a cigar factory, dance on the table in the tavern, make love to Don Jose (who looked like Placido in this film, yes Placido was my first crush ever and I fell HARD!) and I was even looking forward to dying in the end! YES! bring it on! I want the costumes the dancing the singing the passion and even death! The only thing standing in my way was my actual voice which wasn't beautiful at all, but I could be LOUD! I practiced loud a lot and I rather liked it.

I was surrounded my vocally mature singers in high school. I didn't have vibrato in my voice or the sound of a soloist, so I never got a lead in a musical or a solo in choir (although, there was that one time I did sing a duet as an alto to a very gifted soprano). The closest I got to solo singing, was singing in Barbershop quartets because in that you needed to have a great ear (which I had) and a voice that blended well and my voice blended well enough to disappear in the harmonies of this style of music.

After a beginning voice class in college the head of the Opera/vocal department suggested to me that with some private lessons I might have a voice that was suited for operatic singing! Now, at this point in my story I still don't have a vibrato and felt that my voice wasn't particularly special, so for someone to suggest or hint that singing opera was even possible was enough to send me running to my first private voice lesson. I was her first student, so I got extra attention that I desperately needed. I will never forget the lesson that resulted in hearing vibrato in my voice, real vibrato that exists in the spinning tone of opera singers! The joy I felt cannot be fully described, the best way I can do so is to say, imagine all the love and joy in the universe funneled into one person. This was the first time I felt that being an opera singer was within my grasp. All my hopes of being an opera singer were finally going to be realized upon hearing the spin in my voice that resulted in honest to God real vibrato! Now my voice was loud and had vibrato, so sign me up for the opera I'm ready, let's do this...

What follows is the long journey of discovery as I worked so hard towards a career in singing. An imperfect beginning continued throughout this process as well, "talent" kept me on this road which includes several detours. One, of me giving up on that dream and working as a lab technician/phlebotomist in a hospital for years. The next leg of the journey has some fantastic highs and very low depths of misery. Trust me when I say that yes, I have sung all my life and yes, my powerful voice of today feels transcendent as the vibrations fill my head and power felt in my body give way to the expression of my souls offering. It was not always this way, it is today because I was blessed/cursed with this talent which feels more like an addiction/obsession leading me back to it even when I wanted to give up and live a normal human life that looked balanced, healthy and financially secure. You get to throw a word like talent out with all its implications and assumptions that the road was easily and well paved for this career. For my part talent, has always been synonymous with addiction, and this has kept me in the game and on this course towards a level of greatness (fame and a calendar full of concert bookings being the signs of having arrived) that I continue to strive for and though I don't feel I have "arrived", in the way that most people do when they’ve learned a skill, enjoying the stability that comes with a regular paycheck and health benefits and such. I'm fully aware that this doesn't feel like a choice anymore. I'm on the talent road to wherever it leads me. 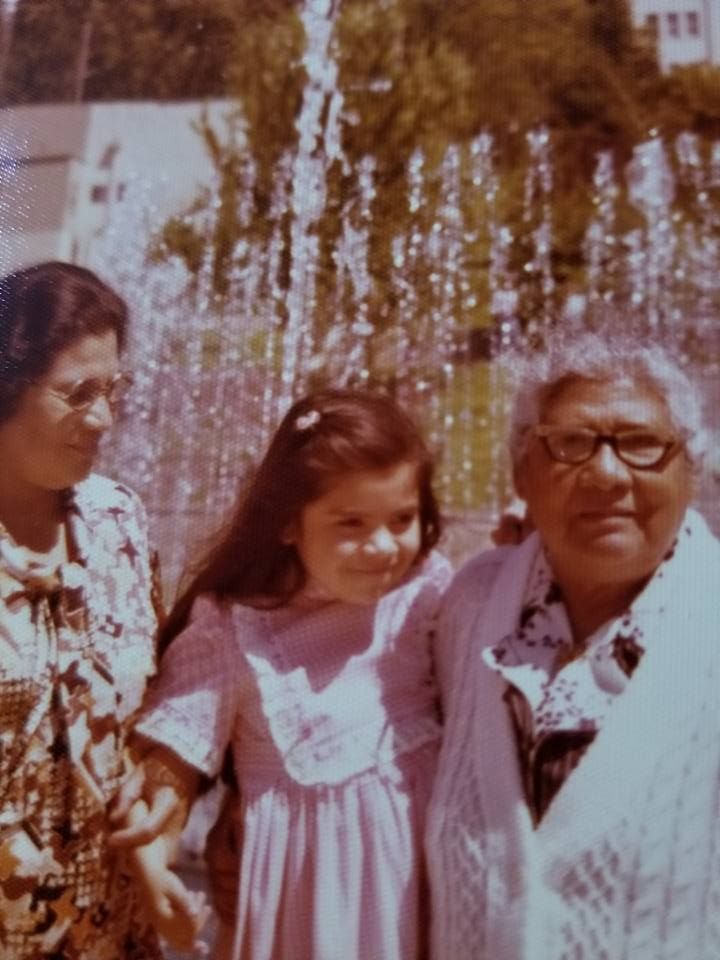 Carmen Alor Mendoza (my mother and boy, could she sing! Such a beautiful singing voice), Me 6 yrs old, Abuelita Alor (My maternal Grandmother)